Every day or two I come home with a pocket full of receipts.
I’m not spending a fortune, though I could be more frugal, but every little thing gets a receipt nowadays.
I got to thinking after having to pop to Tesco two days in a row that supermarkets are missing out on a trick here.
Why not make it a feature of having a loyalty card that you can opt out of paper receipts?
You could have them emailed to you instead or sent to your Tesco club card app. With the aid of smartphones nowadays you’d still be able to check your receipt before you left the store if you wanted and you’d be helping the environment. 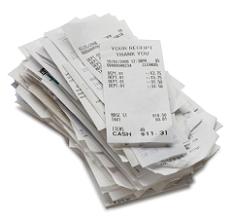 This week I’m following week one of Mindfulness – A practical guide to peace in a frantic world and so I’m being more mindful during cleaning my teeth, keeping my mind in the present.

My mind wandered however and volunteered the idea of cleaning teeth using UV light, or at least augmenting the process with UV light. There are plenty of UV toothbrush sterilizers out there, but it doesn’t look like anything that is actually aimed at killing bacteria in the mouth.

So maybe UV light coming out of a toothbrush head, or could the amount of brushing be reduced and maybe users could just pop in a UV gum shield for 2 minutes and that do?

It’s come to my attention lately that my ideas are becoming predictions and several of my ideas have crept into the real world without my participation. Now I’m by no means saying that pixies are coming and stealing my thoughts in the night but I wanted to make my ideas sort of open source. An open source idea would be one that anyone could act on but that I would be credited for coming up with the initial idea, no financial motives here, just pure ego.

The following posts will detail an idea of mine as thoroughly as I can.